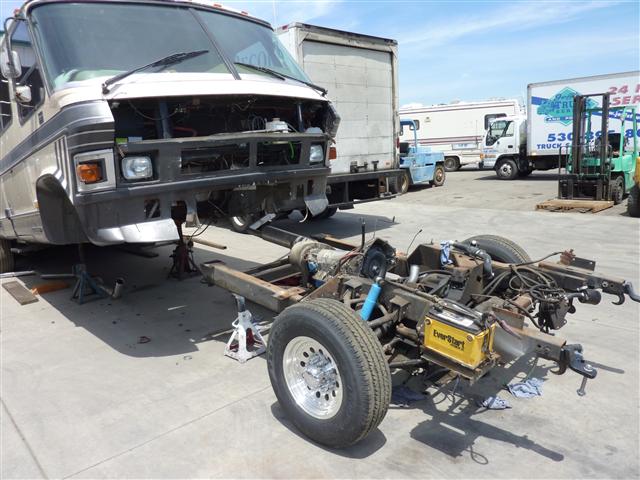 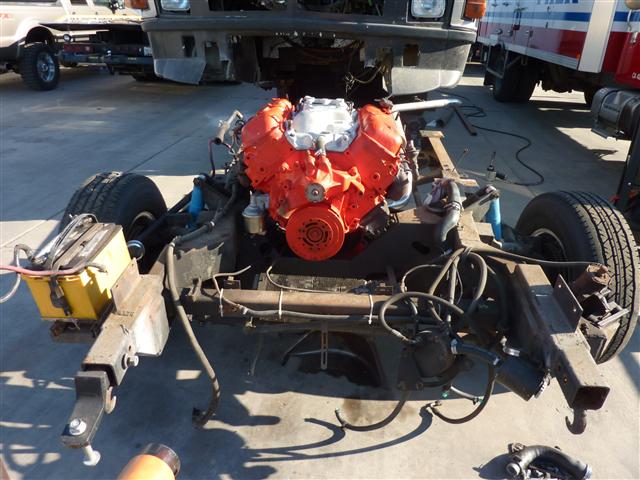 The boys working on my little gem are all well mannered gentlemen and have already grown fond of my Duke -- I think -- they have tackled a tough project.

Jeff's Trucks in Chico California, North of town right off HWY 99.  They have become my Revcon  friends --  New brakes, new Bilstein shocks, new CV Boots, New 16" wheels and now a new -- well, a rebuild, I can't afford a $7,000 replacement -- 454 engine.  CHEVY ORANGE.  They did the rebuild themselves as opposed to ordering a crate motor and this gives them control of the quality in parts and istallation.  These guys are real pros and take pride in what they do.  They have extensive experience with this engine and are matching all of the replacement parts to this particular engine.

Over the past 5 years I have done lots of other things and after each project, I would say, "All that's left now is the engine"?  The engine was running fine but I forgot to knock on wood the last itme I said, "all that's left ...", and sure enough it developed this noise.

I have replace the house furnace (did the work myself)  and remodeled the rear double bed into a twin (you have to remember, we are old people now).  Pulled the old, cracked water tank out and put a fresh new one in.  On a Yellowstone trip we were forced to replace the tranny, and in a previous coast (Oregon) trip we had to replace the front drive differential. Then later -- New 16"  alloy wheels and tires -- and of course the usual upkeep, new brakes and cylinders on rear and new Master cylinder -- then a nice set Bilstine shockes, radiator recore, new roof A/C replacing the old with a new Penguin low profile model.  Upgraded Dash A/C completely, new pump, hoses, everything.  Replaced the belt system on the engine with a 50/50 system -- only the steering pump and A/C pump drive off of V-belts while the other side, air-pump, water pump and Altenator run off a flat belt (no more belt squeal).

Hum, I wonder what a new paint job would run?  My wife is reading my mind again, she just gave me one of those, "you better not be thinking what I think your thinking" looks.  I wring out my crying towel, smile and take a slow walk out to the side yard to gaze at this beauty -- It would really look sharp in a two tone blue with striping, or ...  For now, though, we have to get through the engine rebuild and take a second morgage out on the house to cover the cost or maybe get a job, or maybe rob a bank, or maybe ...

Other owners of this Front Wheel Drive Coach

I know of others that have pulled the motor through a side window, not sure how they did it, looks impossible but the owners of these rigs are an ingenious bunch or nuts, you pick. I hear it has something to do with a fork lift, I think (?).  Another came out through the dog house via an altered engine hoist, and another actually pulled engine parts and pieces rebuilting it inside the coach (ouch).  One proud Revcon owner, Dave, a proud owner of a 31' Revcon Prince,  pulled his engine and replaced it with a modern fuel injection update (502, brand new crate motor), again through the dog house,

with a redesigned engine hoist, he worked it out and then back into the cabin and then out through the side door then reversed the process with his new bigger motor.  I have posted a couple of pictures of his project -- Dave's project -- Dave had a nice web site up but has taken it down for some reason.

UPDATE 07-2011: In the end the enginge replacement added up to a high ticket rebuild with the whole job, including new intake, and carb as well as other new and replacement part (weeping) added up to a whopping  $11,000 (crying hesterically) -- so, now I have a new transmission, new engine , new wheels and tires and no money (rolling about on the floor).  My wife says she would divorce me but I have no money.   I (we) have nearly 5,000 miles on the new setup and this coach is running like a dream.  I have replaced just about everything that can be replaced, water tank, larger water heater, A/C, roof and dash, and forced air heater.  My wife says if she could replace the husband she would be all set -- hum, wonder what she means by that?

Other things I have done to this Slant Nose -- Revcons never die, they only get better (I'm forced to say that)

UPDATE 01/10/2012:  Did I mention we had the brakes done?  Hum, well, recently we were traversing a winding, downhill (mountain), road and there was this funny smell -- everyone knows the smell, brakes burning.  I did a little research and found there bakes were not releasing completely.  Luckily we were close to home.  A couple of days later I ran it over to Jeff"s RV and Truck.  The bad news was one of the front calipers was hanging and was bad enough to need replacement.  It was decided to replace both sides -- new Calipers for the front.  Now the brakes are virtually new all around, after earlier replacement of rear cylinders and the master up front.

Update 12/16/2017:  Wow, 5 years, just like that.  I am going to work backward on this update -- our most recent trip was to see the Eclipse hit the Oregon Coast.  We had reserved a parking spot at the Chinook Winds at Lincoln City.  Luckily, we took off a few days early.  We were heading North on the I5, got about 70 out and the engine started sputtering then a loud backfire and every thing shut down.  I manage to get it to a wide shoulder and could not get it to restart.  Of course, it was 10 pm at night and hot.  We got hold of AAA and after 2 more hours a tow truck showed up.  First time ever for a Tow, and I thought they would bring out a flat bed, but no, a tow -- all the way back home and parked in front of Jeff's Truck Repair.  Turns out the "hot" aftermarket Distributor I have installed failed.  Two days later and we were back on the road.  Saw the Eclipse, great fun, headed home by way of Coos Bay and because of the Oregon Fires were stayed a little longer at the Mill Casino.

Going back, 06/06/2016:  Propane tank regulator split.  Propane spewing out.  I managed to get it shut off without blowing up.  Fixed it with a new regulator.  I had very done any work on the Propane tank -- the repair guy said the regulator had been installed upside down?  The Tank has one of those fancy shut off features if you spring a leak, but apparently it only works after the fact.  It seems that the regulators have a weep hole in the bottom for excess "oil" and water to drip out -- apparently the "oil" build up cause excess pressure in the regulator, causing it to, literally, exploded at the seam.  So, go check your regulator on your propane tank and make sure the danged thing is in right side up.  Other than that the Duke Revcon has been running great.  Hope to update in another 5 years -- ha, ha, ha.